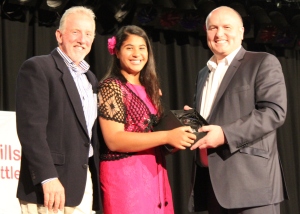 For those of you who are unaware, following the State championships in March, as a result of her fine performances at State, Sally was selected in the State team to represent NSW at the Australian Team Championships, this year held in Perth. This is a very prestigous honour, as only 11 boys and 11 girls were selected to compete.

Sally has had a fantastic season leading up to the Australian championships.

At club level, Sally competed in 13 weeks of competition, missing some due to major championship events. She accumulated 157 points, including 34 pb”s. She also broke 5 club records, the shot put with a throw of  11.06 metres and breaking the discus record 4 times with the record now at 40.27 metres.

At the Zone championships, Sally won the shot put by over 2metres and won the discus by more than 15metres, clearly dominating these two events. She also came third in the javelin.

At the Regional championships, Sally again won the shot put and discus and in doing so, set two  new Regional records.

Throughout the season, Sally was also involved in other major athletic events.  In October, competing at the NSW All Schools championships, Sally won gold in the shot put and discus.  In February, Sally competed at the NSW Junior championships winning the discus by almost 5metres and missing a bronze medal in the shot put by only 3cm.

At the State Little Athletics Championships, Sally’s efforts got her 2 bronze medals, with throws of 11.05 metres and 40.99m in the shot and discus. It was this consistent throwing that earned Sally her place in the State team.

At the Australian championships in Perth, Sally did herself and her team proud while competing against the best athletes in Australia. With a put of 11.09 metres, Sally came second in the Shot. And with a massive throw of 42.51 metres managed a fantastic third place in the discus. A performance we are all proud of and has clearly positioned her as one of the best athletes in Australia in her favoured events.

As you can see, this fine young lady and talented athlete has had an exciting and rewarding season. Congratulations Sally Shoky as the Hills District Little Athletics Athlete of the year!

Update – State Relays – Important if you are competing